Hottest soccer team in the state? It's the Clare Pioneers

They're red-hot, there's no other words to describe it. The Clare Pioneers stretched their winning streak to 10 games by winning the Bobcat Invitational at Bay City John Glenn on Saturday. 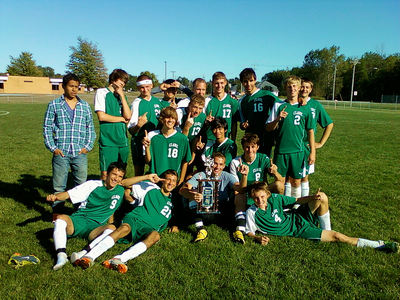 They're red-hot, there's no other words to describe it.

The Clare Pioneers stretched their winning streak to 10 games by winning the Bobcat Invitational at Bay City John Glenn on Saturday.

Clare enjoyed a 1-0 victory in the finals over the host team.

Clare played Saginaw Nouvel Catholic Central, a team the Pioneers had beaten earlier in the season 4-0.  Nouvel’s coach had his team ready. Despite their increased play they were unable to avenge their earlier loss, losing to Clare this time 3-2. Clare’s goals were scored by Taylor Ardis, Alex Esteban and Kaleb Molina. Oriol Nomen had two assists and Ardis added an assist. The win earned Clare three points in pool play.

The Pioneers put 12 shots on goal but could not score.  Clare’s goalkeeper Bryce Anderson faced just one shot on goal, which he saved.  The match ended in a 0-0 draw, earning Clare another point.

Clare would then face Bay City John Glenn, in the finals. Esteban scored the sole goal of the match. Ardis assisted. Anderson made 10 saves.

Clare’s record is 9-3-1. The Pioneers extended their unbeaten streak to 10.

I think the key behind the winning streak has been the depth of my roster. Everyone is starter quality,” said Clare coach Doug Helmling. “Any streak like this can be stopped on any day. We just need to face every opponent like they are a team poised to knock us off our perch, because that's what they all want to do.

“It sounds cliche, but everyone has been playing well. There are games when a player might be a little off his form, but a substitution and we're back to form without skipping a beat. Looking at my stats, there is no individual racking up goals and assists. We are a balanced team and when we are clicking we can match up with our opponents pretty well.

“This is a great group of young men. They are friends on and off the pitch, and when they need to rally they step up. They play hard for each other with no egos involved. It's all about working hard to help out their friends and teammates.”