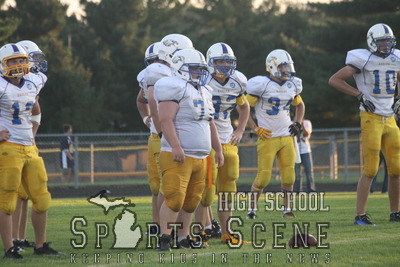 “Portland St. Pats jumped out to a 21-0 lead in the first quarter but our kids came fighting back and showed a lot of heart to even the score at 21-21 in the early part of the third quarter,” said CC-C coach Jason Gray. “We were able to get their offense into third and long numerous times and they were able to convert the first down and extend the drive.

“We feel if a couple breaks go our way than we are 3-1 right now and still alive for a playoff berth. We will stay the course and keep doing what we do best and that is come to practice every day ready to work hard.”

This week, the Eagles play Dansville, which is 2-2.

“They run the spread offense and multiple front defense,” Gray said. “They have a very athletic quarterback that we need to contain and their offensive line pass blocks very well. So, we are looking forward to throwing stunts at them to confuse their offensive line.

“Coach Dan Price does a great job preparing his kids each week and we know Dansville will be excited for this game as it is their homecoming and last year they were our homecoming when we beat them 54-16. Dansville is much improved this year, but we feel we are much improved as well regardless of our current record.”