Mitchell has big night for Shepherd 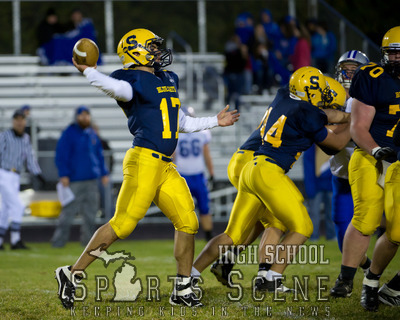 SHEPHERD ― Shelby Mitchell starred for the Shepherd Bluejays on Friday, throwing for 220 yards and two touchdowns and adding 137 yards on the ground on 22 carries and two scores in his team's 34-26 loss to Hemlock.

Hemlock improved to 5-1 while Shepherd fell to 1-5.

Devon VanBonn caught two touchdown receptions in the fourth quarter for Shepherd. He had seven catches for 151 yards and two fourth-quarter touchdowns.

“It was an exciting game of big plays, 400 yards of offense from each side,” said Shepherd coach Tom Creuger. “Big hits and a game right down to the wire. It was a typical TVC Central football game.”