Skaryd of nothing: Ashley running back gains 276 yards 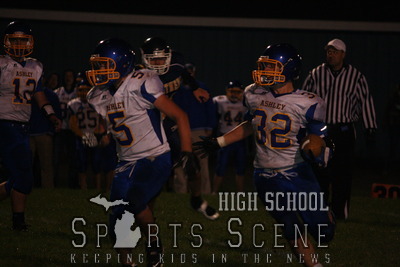 Brandon Childress threw a touchdown pass of 10 yards to Andon Ware in the second overtime and the same pair combined for the two-point play. The Baldwin defense then stopped the Bears on four downs to preserve Baldwin's second straight win.

The game was tied 30-all after regulation. Ashley got the ball first and scored on Tyler Skaryd's 1-yard run. He also ran for the two points.

The Panthers put together several comebacks to force the overtime, outscoring Ashley 22-8 in the fourth quarter.

Ashley scored the only points of the first quarter on Frankie Deming's 1-yard run. Baldwin tied it at 7:03 of the second on a Childress touchdown pass and conversion run by Ware.

Ashley scored in the second quarter on Josh Wilk's 14-yard pass to Justin Wilk and a 2-point run by Skaryd.

In the third, Ashley scored on Skaryd's 11-yard run and conversion plunge for a 20-8 lead.

Ashley scored with 5:04 to play on Skaryd's 4-yard run and his successful conversion try for a 30-16 lead. But Baldwin came back to tie it.

Skaryd rushed for 276 yards to lead Ashley, which had 371 yards on the ground and 91 passing.