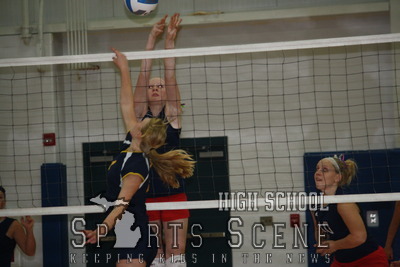 Crossroads improved to 3-1 in the league and 12-16-3 overall. Baldwin is looking for its first league win.

“I liked our concentration level,” said Big Rapids coach Mike Shaver. “It's kind of easy sometimes to back off a team that's not real strong. I thought we kept our concentration and focus the whole match without playing down to the competition.”

Courtney Carlson's kill in the first game gave her team a 20-8 lead en route to the win.

“Our serve receive was pretty good,” Shaver said. “Courtney Carlson passed very well. Our serve receive  has been good our past two or three outings. That's why our offense is coming around. Courtney had a good game hitting too, especially near the end. I thought we played pretty well.

Courtney Carlson had a pair of kills in the final game to help the Cougars bolt out to a 17-3 lead.

“I thought we played really well,” said Courtney Carlson. “We started to get better and get our serves over as the day went on. Our defense probably could have done better on coverage. Overall, I thought we did well.”

Courtney Carlson had 10 kills and no hitting errors with a .265 percentage, plus four aces. Mallory Carlson added eight kills, seven digs and one block and Brooklyn Carroll contributed 17 assists and four aces.