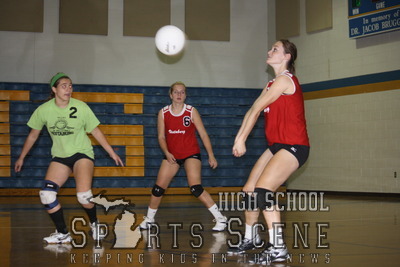 A kill by Micki Drumm put the Wolverines up 23-15 in the first game.  Jackie Gostomski served for the winning point.

In the second game, Vestaburg came back and had a 13-10 lead on a tip by Gostomski. Saige Nabozny served two aces for Evart which had an 18-17 lead. But Drumm finished off the game with three straight points for the visitors including two aces.

In the third game, Vestaburg came back and took a 16-14 lead on Abbey Pratt's two service points. Evart took a brief lead but Gostomski's ace tied the score 19-19. Pratt had a kill for the 25th point for the match winner.