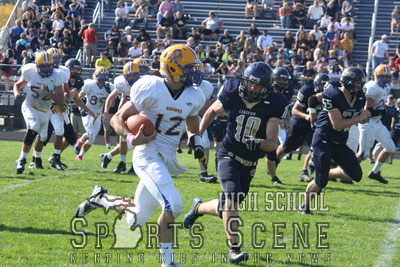 It was not a happy homecoming football game for Lakeview, thanks to the talents of Morley Stanwood and Tyler Hanks

Hanks scored five rushing touchdowns, all in the first half, to give Morley Stanwood a 35-21 lead at halftime on the way to a 49-27 victory.

Steve Hopkins scored to open the second half for a 41-21 Mohawks advantage.

Quarterback Travis Zajkowski threw a 15-yard TD pass later in the half to Alec Aherns to give MS a 49-21 lead.

Lakeview converted on the old Statue of Liberty play for a 25-yard touchdown run late in the game.

Morley Stanwood is 6-1 overall and has clinched a playoff spot. Lakeview falls to 2-5.