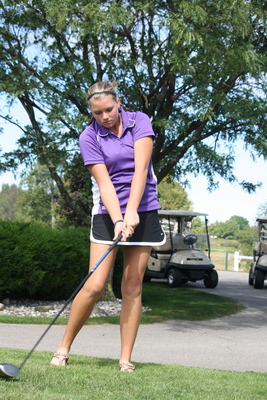 Colosky won with an 86 at the Alma Panther Classic Invitational earlier in the season and has fired a low of 82. But she's expecting even more. After competing in junior events during the summer,  Colosky has enjoyed playing in the high school atmosphere.

She won the Farwell Invitational at Eagle Glen Course Course in early September with an 89 . She was the only freshman playing, but she beat all the sophomores,

“She's really hard on herself,” Staley said. “She expects more of herself, which is fine.”

“I would like to break 80,” Colosky said. “That would take more concentration on my part.”

Colosky said she played practically every night at Eagle Glen during the summer.

“She plays a lot with her dad,” Staley said.

Colosky showed extensive potential during the summer during junior tournaments. She won the 13-and-14-year-old division this summer at the Riverwood State Junior Golf Tournament.

Expectations were high as she got ready for the fall golf season. But as Staley pointed out, there are never any guarantees.

“It's a whole different animal getting used to high school golf,” Staley said. “We'd like to get more girls out on the team so she could also enjoy the team experience.”

As the season started out, Colosky only had two teammates, meaning the Eagles weren't able to post a team score.

“We need some more girls to come out and be on our team,” Colosky said. “We're not eligible for team trophies, but we are a strong team, no matter what.”

Looking ahead, Colosky is confident she'll be able to qualify for the state finals in October “if I'm on my A game.”

Staley is also confident that Colosky has the potential to qualify for the state finals.

Colosky wants to work on her putting and getting up and down effectively.

She has found the high school courses to be challenging for her game.

“The Fortress at Frankenmuth, that was the most challenging we've played so far this year,” she said. “They've all been fun.”