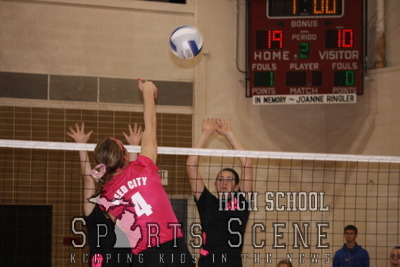 It was Dig Pink night to promote cancer prevention

Big Rapids got out to a 4-0 start with Maddie Bucholtz serving three straight points.

It was all Reed City after that

“We started out well,” said Big Rapids coach Abby Snyder. “Then they stopped talking. We couldn't get into it after that.”

In a 2-0 win over Holton, “they were good, everything went well,” Snyder said.

For Big Rapids, Bucholtz was 100 percent in serving with one ace for the entire night. Sara Rae added 25 digs. Gosma contributed five kills and Paige Johnson had 16 serves and two aces.

Next Wednesday in CSAA action, Big Rapids is at Lakeview and Reed City will entertain Morley Stanwood and Chippewa Hills.