Jackson Gross had two touchdown runs of 74 and 49 yards in the second half to lift the Clare Pioneers past Beal City 26-18 last Friday in a nonleague battle of football powers. Clare improved to 1-1. 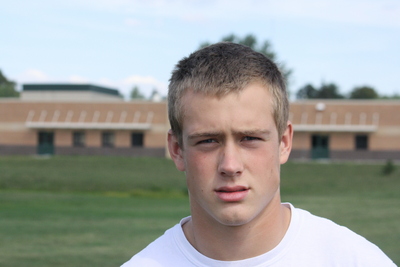 CLARE ― Jackson Gross had two touchdown runs of 74 and 49 yards in the second half to lift the Clare Pioneers past Beal City 26-18 last Friday in a nonleague battle of football powers.

“I think we played really well for having four sophomores that play a lot and one sophomore who played tackle where he's never played before,” said Clare defensive end and tight end James Wezensky. “It's very important (to win). Starting 1-1 is better than 0-2 for our morale booster.”

With Travis Smith having graduated from the 2010 team, Gross noted that he's anticipating  running the ball more.

“I'm looking forward to that,” he said. “I'm a lot faster than I was last year. I ran the 100 meters in track. That helped me a lot with my sprints in being fast. I'm trying to be able to read plays and know what my linemen are doing and understanding plays.”

Against Beal City, Clare led 7-0 after its first drive of the game on a 24-yard pass from Brent Luplow to Aaron Haynak with Hunter Ruby booting the extra point.

Luplow scored on a 3-yard keeper with 3:49 to play in the second.

The host team got the ball back on the kickoff and Gross raced for his 74-yard score and a 20-12 bulge.

But Clare countered with a touchdown on a 49-yard run by Gross.

That made it 26-18 and Beal City drove deep into Clare territory in hopes of staying alive. Aaron Haynak intercepted a pass to preserve the win for Clare
Brent Luplow was 8-of-13 in passing for 105 yards. Haynak caught six passes for 90 yards.

“Jackson had a great night,” said Clare coach Kelly Luplow. “Our defense improved. “We were very pleased with the improvement from last week. From week one, they showed a lot of improvement.”