Imagine this: the high school football season is a third of the way completed and is nearing the halfway point. Is it too early to be talking about playoffs? Yes Jim Mora, playoffs. 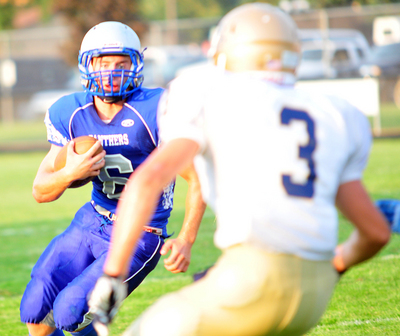 Imagine this: the high school football season is a third of the way completed and is nearing the halfway point. Is it too early to be talking about playoffs? Yes, Jim Mora, playoffs.

But, I've seen many teams start out 3-0 and still not make the playoffs. Many conferences are opening play this weekend, which is likely to mean tougher competition for many teams.

Grand Ledge, Lowell, and Mount Pleasant are drawing recognition across the state in various polls with 3-0 records. Rockford, at 2-1, with its only loss to Lowell, is still highly regarded.

Give Grand Ledge its due after an impressive 14-0 win Friday night over Lansing Sexton. Grand Ledge had scored 76 points in its first two games and struggled against Sexton, which netted 16 tackles from linebacker Terrence Wright. Running back Josh Bachert was tough in picking up 116 yards on 19 carries. He scored both touchdowns.

The Oilers looked awesome in compiling 581 total yards on offense in a 56-28 win over Flint Northern. The Oilers were led by Ryan Elliot, who passed for 181 yards, and went 14 of 18 with three touchdown passes. Mount Pleasant scored seven first-half touchdowns.

Lowell blanked Kenowa Hills 47-0 in a special night. The team was recognizing the third annual Pink Arrow Project, raising awareness of cancer and supporting families affected by the disease. Gabe Dean scored four touchdowns in the first half for Lowell.

Rockford had a 42-30 win over Grand Haven for its second straight win after the season-opening loss to Lowell. The Rams' special teams scored two touchdowns, including a 75-yard punt return by KC Zenner.

Ithaca and Sacred Heart Academy are both defending state champions who should not be overlooked.

In fact, can anyone beat the Yellowjackets? I'm sure Ithaca coach Terry Hessbrook doesn't want me posting any bulletin board material for his upcoming opponents.

But the Yellowjackets are sure looking sharp. Their 70-0 victory over Valley Lutheran was impressive when you consider Travis Smith was able to rush for 151 yards and pass for another 145. Garrett Miniard had another big day with 113 yards and three scores. Perhaps most impressive was Luke Rayburn going 10-for-10 in PATs, which doesn't happen every day in high school football.

Congrats to the Yellowjacket PAT team.

Sacred Heart is 1-2, but its losses were to Beal City and Muskegon Catholic Central, a team that may be considered the best Division 8 right now. The Irish need to zero in on winning at least five of their next six and improving. Once the playoffs start, anything can happen.

Montabella is 3-0 and is a rare high school team for whom putting the ball in the air can pays dividends. In a 22-20 win over Manistee Catholic, Central, quarterback Charlie Helmer was 11 of 19 for 180 yards and two touchdowns.  Both touchdown passes went to his favorite receiver, Jemikal Papendick, who caught six passes for 92 yards and the two scores.

But Jackson Gross of Clare, with back-to-back weeks of more than 200 yards rushing, brings credence to the run-first mentality about 90 percent of our high school coaches maintain. Even so, his teammate, Aaron Haynak, is a wide receiver with 493 yards of pass receiving after the first three games. So it still pays to occasionally put the ball in the air.

If you look at several game results, it seems like a lot of players last weekend were getting a massive amount of yards on very few touches. A case in point was Ovid-Elsie's Dustin Karlik who had 155 yards on four carries and touchdown runs of 83 and 64 yards. He caught one pass for 19 yards in his team's 40-12 win over Chesaning.

In the Detroit area, Grosse Ile looks impressive with a 3-0 record after a 20-14 victory over St. Mary Catholic Central. Previously, Grosse Ile had lost to that team eight straight times by a total scoring margin of 378-84.

Wyandotte Roosevelt running back Hunter Matt had four carries for 140 yards and four touchdown in his team's 46-8 win over Trenton. Yep, that's right, four runs and four TDs. One of those was a 55-yarder.  For the season, he has nine carries and six touchdowns. Not bad.

Allant Gardner had a 104-yard interception return in Michigan Collegiate's 60-0 blanking of Cesar Chavez Academy. That could rank as the state's Play of the Week.

The three kingpins that should be recognized as possibly being among the top teams in the state are Farmington Harrison, Detroit Catholic Central, and Utica Eisenhower, all at 3-0.