Lindsay having another great winter for Clare 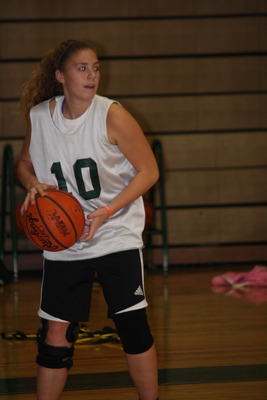 Winter had a season high of 33 points against Saginaw Nouvel and in December was averaging 289 points per game.

“Over the summer and offseason, I put in a lot of work to make my game better,” Winter said. “But it's not just that. I give a lot of credit to my teammates. Without them you can't score. They're running the plays. They're just as much a part of that than I am.”

The Pioneers got out to a 5-1 record.

But Winter's increase of 10 points per game over what was an excellent junior season is definitely impressive.

“Lindsay just works so hard at it during the offseason,” said Clare coach Matt Rodenbo. “That's what I would say is the biggest thing, the work ethic that she has. She's a year older. Shots tend to go down a little more as you get older. She's shooting the ball very well.”

“I put a lot of time working on my shot,” she said.

“She's shooting well over 40 percent from the 3-point line and well over 50 percent in two-point field goals,” Rodenbo said. “She does get a lot of attention. But we're doing a nice job of setting screens for her. She's doing a nice job of reading those screens and knowing when to attack. We have a lot of veterans around her which helps open things up.

“I think we're more balanced this year than we were in the past. Her assists per game are up about three per game this year. It's her knowledge of the game. Her steals are up. It's not just her scoring, every aspect of her game is better this year.”

Winter played a major role during the 2010-11 season in leading her team to the Class C regional quarterfinals. Clare has moved into Class B for this season.

“We have high expectations,” Winter said. “We're doing good but we can do a lot better. We have high goals. We have had big wins. We're playing good. We still have a long way to go to be as good as we want to be.”

“We played a tough game and we gave it our all,” Winter said.

As talented as she is this season, Winter continues to work on her game.

While she spends a lot of time in basketball and would seem to have a bright future in that sport, Winter is also coming off a strong cross country season with the Pioneers. The team placed 12th in the Division 3 state finals. Winter was the No. 2 runner on the Clare team behind Victoria Harper who was 16th in the team race at 19:04.7. Winter was 30th in the team race in 19:36.1 With all runners combined, Winter was 41st.

It's more than just a sport Winter runs to stay in shape for basketball.

It helps with your stamina and gets you in good shape so when you come into the season you're in good physical shape,” Winter said. “You feel good because you've been running so much. It makes it easier.”

The Pioneers appear to be the favorite again in the Jack Pine Conference, but will see some strong opposition in non-league action.

We have a tough non-conference schedule with McBain, Gaylord, Montabella and Sacred Heart,” Winter said.

Winter likes the potential of her team.

We're fast, all of the girls have played together since the third grade,” she said. “We have a lot of strengths and we have to use them to our advantage.”