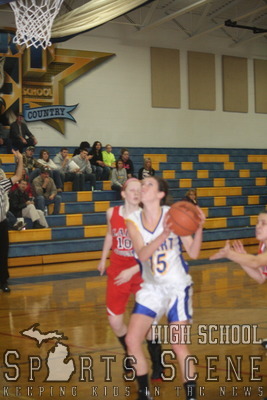 Tweet
Kaeila Brooks scored 18 points including 12 in the second half while Malory Carlson added 14 points to lead the Crossroads Cougars to a 55-36 non-league girls basketball win over Evart in recent action.
It was a season-high for Brooks in helping to cover for Carlson, who battled second-half foul trouble.
Carlson drove for a basket and 25-20 lead early in the third quarter. She later picked up her fourth foul. The Wildcats weren't able to penetrate the Cougar defense and Carlson scored on a shot from the corner for a 29-20 advantage at 5:05.
Carlson scored late in the second quarter for a 22-20 Crossroads halftime lead.
Crossroads improved to 8-1 while Evart fell to 3-6.