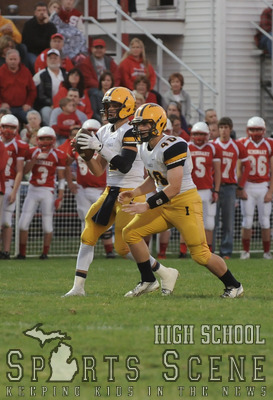 The Ithaca Yellowjackets have hit the magic number of 50 straight wins.

Actually the goal is to be at 56 straight wins before this season is over.

But win No. 50 in a row for Ithaca came Friday night in a 76-0 blasting of St. Louis. The three-time state champs will try to close out the season with a win against Shepherd this Friday and then will start the five-week playoff set in search of their fourth state championship.

Ithaca built a 56-0 halftime lead over the Sharks. Bryan Shaw had nine rushes for 152 yards and four touchdowns. They set a school record for points scored and also finished the conference season undefeated for the fourth straight year.

Travis Smith had another big night at quarterback with 7-of-13 for 197 yards and had a 51-yard touchdown pass to Logan Hessbrook.